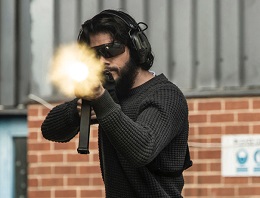 The producers of action movie American Assassin filmed Croydon as Istanbul for the story of a young counter-terrorism agent.

St George’s Walk was dressed and filmed as the Turkish city over a three-week period last summer.

“They established an atmospheric Turkish restaurant on the corner of St George’s Walk, and the entire parade of shops along St George’s Walk was dressed as an area of Istanbul,” said Andrew Pavord, director of FilmFixer, which manages the film office service for Croydon Council.

“Pictures vehicles – or cars that appear in the film – lined St George’s Walk to make it look like a busy street.”

Croydon has appeared on camera before for high-profile productions, usually as a convenient stand-in for other parts of the world.

A recent example was Brad Pitt’s satirical Netflix movie War Machine. The film is largely set in Afghanistan but the production team shot briefly at Croydon’s historic Addington Palace, using the building as a double for the residence of the president of Afghanistan.

Coachstar Location Facilities based in both West London & Leeds specialise in the hire of Winnebago’s/talent trailers and make-up/wardrobe splits to the film and TV… more Call: 020 7112 1578   |   Add to Shortlist