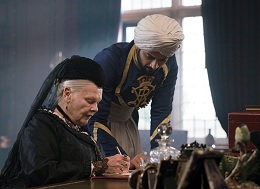 Osborne House was the monarch's summer residence and the film’s producers secured crucial permission to spend several weeks filming at the key location where much of the film’s story takes place.

The Victoria & Abdul team became the first large-scale feature to shoot in the house when English Heritage was supportive of the production, with some conditions.

“One stipulation was that we couldn’t close the house to the public, so a detailed schedule of where we wanted to be and when was drawn up,” says Adam Richards, the film’s supervising location manager, in comments to The Knowledge.

“Managing the ever-changing needs of a film crew and the needs of their visitors at one of English Heritage’s top tourist destinations wasn’t easy, but we managed it without losing face.

“The other issue was the fragility of some of the furniture. For authenticity, we wanted to use as many of the original furnishings as possible.”

English Heritage imposed a limit on how many people could use each piece of furniture. In scenes showing an audience with the Queen in Osborne House’s drawing room, most of the actors had to break with history and stay standing to avoid any damage.

Several other English Heritage sites stood in for different story settings. Popular London filming location The Old Royal Naval College in Greenwich doubled for Windsor Castle interiors and Knebworth House north of the capital was used for locations in both Windsor Castle and Balmoral, the Queen’s Scottish residence.

Production headed outside the UK briefly to India, with the producers feeling a real location shoot in the country was necessary to show their commitment to the story of Abdul Karim’s origins.

“We wanted to honour a culture and a history that have too often been minimised and rejected over the past century and a half,” says Beeban Kidron, one of the film’s producers.

“Filming in the city of Agra reaffirmed that we were bringing Abdul’s story out. He was from there, in every sense of the phrase.”

Driving the highest standards of craft services for the production industry, we work hard to deliver outstanding coffee and food that hits the spot to… more Call: 07871 598162   |   Add to Shortlist

Do you remember the best coffee you ever had? Our individually handcrafted coffees are a joy to savour. Our discreet and experienced team of professional… more Call: 07500 962412   |   Add to Shortlist

Peckish catering services are a young and vibrant catering company based out of Essex. Specialising in location catering for the TV and Film industry, Peckish… more Call: 07530 665969   |   Add to Shortlist

We can caffeinate your cast & crew, with our freshly ground coffee, from Union Hand Roasted, served from either our quirky little coffee van or… more Call: 07850 455136   |   Add to Shortlist

Antonio’s TV and Film Catering- Global Location caterers of distinction. Together, Front of house Antony Zuri and Head Chef Ian Kluth have been in the… more Call: 07500 276560   |   Add to Shortlist

CGI Catering can provide a Covid 19 compliant kitchen. As a family run business our 6 core staff have been in isolation together since the… more Call: 01883 338701   |   Add to Shortlist