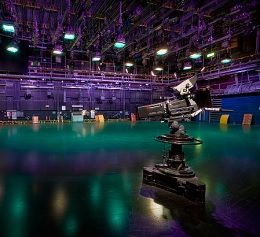 The BBC Television Centre site was the BBC’s London base for more than 50 years before closing in 2013.

Most of the space is now being redeveloped as residential apartments, but BBC Worldwide has retained offices in the building and the new studios have been opened next to the flats under the management of BBC Studioworks.

“Whilst some may get nostalgic about the re-opening, this really is a new Television Centre, set up for the future with leading-edge technologies, flexible facilities and a fantastic team running it.”

A new series of The Jonathan Ross Show started filming at the studios last week and Sky’s comedy chat show The Russell Howard Hour is also scheduled to shoot at the facility.

From 2018 the new TVC will be the temporary home for four ITV Studios Daytime shows while ITV’s London headquarters is itself redeveloped.