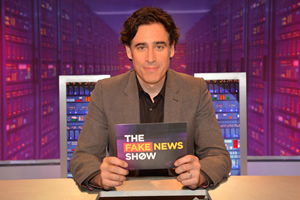 Stephen Mangan is to write and star in Hang Ups, a new comedy based on the Emmy-nominated series Web Therapy created by Lisa Kudrow, Dan Bucatinsky and Don Roos.

The 6 x 30 is about an unconventional therapist trying to keep his unconventional life from falling apart, as he develops a new form of therapy in which he holds weekly quick-fire sessions with his patients online.

Mangan, who has written the show with Robert Delamere, said of the project: “People are complex and complicated and they lead messy, knotty lives. We’ve tried to put some of that all-too-familiar turmoil on-screen and the result, I think, is chaotic, glorious and disturbing.”