The One Show filming in Northern Ireland 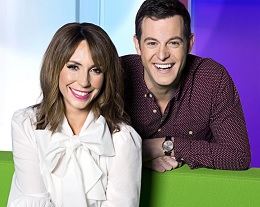 The BBC’s flagship evening chat series The One Show is based in Northern Ireland throughout this week.

Each night the show will come from a different part of the region, beginning at Carrickfergus Castle outside Belfast tonight (7 August) and gradually moving further north to end on the Giant’s Causeway on Friday evening (11 August).

“It's always great fun when we take the show on the road and I'm really looking forward to coming to Northern Ireland for the week,” said Alex Jones, who presents the show alongside Matt Baker.

“We'll be visiting some fantastic locations and bringing some great stories to The One Show audience.”

In April the BBC announced it would be spending an additional £11m on Northern Ireland programming over the next three years, as part of an overall increase in funds also being directed to Scotland and Wales.

The extra Northern Ireland investment will include enhancing digital news services across the region and boosting local TV drama, comedy and factual commissions by 50%.

Northern Ireland is best known internationally as the home of HBO’s fantasy Game of Thrones, which is preparing for its final season. Belfast is also set to host major US series Krypton, a political drama set on Superman’s home planet.