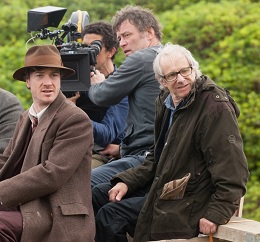 Filmmaker Ken Loach has voiced his concerns about the impact that Brexit could have on the UK’s ability to form movie co-productions with European countries.

Loach and his filmmaking partner and regular screenwriter Paul Laverty talked to the Hollywood Reporter at the Karlovy Vary Film Festival in the Czech Republic.

The process of leaving the EU has become less certain since Theresa May’s government was weakened in last month’s general election, but Loach (pictured on the set of his 2014 film Jimmy's Hall) has no doubt that Brexit will still take place in some way.

“There will be some form of leaving the EU,” Loach told the Hollywood Reporter.

“Our co-production deals depend on workers from other countries coming to [the UK] to work on our films. If it is made very bureaucratic and difficult – if we leave the EU – that will make it more difficult and there is a danger that could happen.

“If free movement stops and it becomes a big bureaucratic process for people to work in Britain, then that is going to inhibit [co-productions] because it is cumbersome.”

Loach added that the European Film Academy could help ensure that Brexit negotiations make allowances for freer movement of individuals for film co-productions.

In 2015, 30 of the 201 feature films made in the UK were official co-productions, according to figures from the BFI.