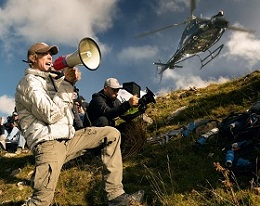 Michael Bay’s action sequel Transformers: The Last Knight filmed extensively across England and Wales, spurred partly by a storyline that flashes back to the role of the robot characters throughout events and legends in British history up to the present day.

Filming extended to Newcastle city centre, and to the Isle of Skye in Scotland’s Inner Hebrides.

In central London, Sir John Soane’s Museum near Holborn offered a historic location that became a key character’s grand home in the film.

Elsewhere, footage for the franchise’s trademark frenetic action sequences was filmed in multiple central London locations, often in a matter of hours early on weekend mornings.

“The clash of cultures – in more ways than one – has been a lot of fun to support,” says Karen Everett, director of FilmFixer, which manages film offices in several of the London boroughs that were shot for the movie.

“The chase scenes in particular, done with minimal disruption, prove once again that we have the infrastructure, the expertise and the goodwill to create incredible stunts on the streets of London.”

Wales hosted nearly a month of production in the late summer of last year, with several dozen local crew hired to support the shoot in the Brecon Beacons.

“We are lucky to have a wide variety of beautiful locations available here, including everything from dramatic open landscapes, native forests, spectacular waterfalls, and in this case a deserted quarry.

“Our filming officer and team of park wardens are experienced in working with a wide range of filming requests and these in turn support the local economy.”

Britain’s filming incentive support, studio facilities and crew base make the UK one of the world’s top production hubs.

International spending on feature productions in the UK came to nearly £1.4bn in 2016, representing an 18% increase on the previous year, according to figures from the BFI released earlier this year.

A May report from location filming agency FilmLA in Los Angeles found that as a filming location for big-budget US features, the UK is in fact second in popularity only to the US state of Georgia.