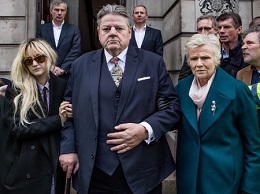 The growth of the film and TV industries in Yorkshire and Humber has outstripped every other part of the UK including London and the south-east.

According to figures released today by Screen Yorkshire based on data from the Office of National Statistics (ONS), the rate of growth is double the national average.

Screen Yorkshire’s Content Fund, which is supported by the European Regional Development Fund, has been credited with playing a major part in the upturn, having brought more than £157m of new business to the area since its inception.

The fund has backed several high-profile independent features such as Testament of Youth and Swallows and Amazons, as well as TV productions such as Peaky Blinders and National Treasure. The opening of a dedicated studio at Church Fenton – currently housing the second series of ITV’s Victoria – has further served to raise the region’s film-friendly profile.

Sally Joynson, chief executive at Screen Yorkshire, said of the figures: ‘’With the UK’s creative economy booming, this new research is highly significant for Yorkshire and these figures clearly demonstrate that the region is punching above its weight when it comes to producing world- class film and TV.

“Furthermore, this growth has been achieved against a backdrop of increasing consolidation and hugely disproportionate investment on a national and local level into creative industries on the west side of England and the UK.’’

In addition to revenue figures, the ONS data also shows that employment across the film and TV industries in the region grew 88% against a UK average of 32%.

The total impact of the screen industries in Yorkshire and Humber is estimated to support around 12,000 jobs (directly and indirectly) with a turnover of just below £1.1bn.