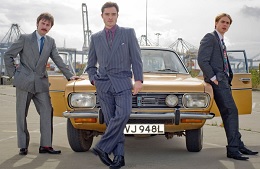 Fudge Park Films is in prep on a new comedy feature set at UK music festivals, which will be directed by Inbetweeners co-creator Iain Morris.

Currently untitled, the film will follow a group of young people and recent graduates as they spend a summer enjoying themselves. The movie will shoot partly on location at real festival venues in and around London and the south-east.

Fudge Park Films was established by Morris and his Inbetweeners co-creator Damon Beesley in the summer of 2015.

The company has so far produced dark comedy series Ill Behaviour, following a group of friends who force homemade chemotherapy treatment on their cancer-afflicted housemate. Fudge Park has also made the 1980s-set White Gold (pictured), which is set amid a team of double-glazing salesmen in Essex and co-stars former Inbetweener actors James Buckley and Joe Thomas.

Production Intelligence subscribers can log in now for details of the line producer and producer on Morris’ untitled music festival feature, and for information on the planned date for the start of filming. Be sure to follow the project on PI for more details in the coming weeks.

Hi there & thank you for stopping on our page! At location base facilities our fleet of facilities have all been specially designed for the… more Call: 07445 521709   |   Add to Shortlist