Wonder Woman filmed from a UK base 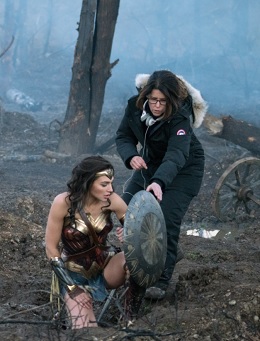 Warner Bros’ superhero movie Wonder Woman used the UK as a production base and negotiated the closure of Trafalgar Square for key scenes.

The film is largely set during the dying days of the First World War in 1918 and follows publisher DC’s Amazon comic book character Diana Prince – the Wonder Woman of the title – as she is drawn into the conflict by a crashed US spy.

Filmmaker Patty Jenkins and her team shot all their stage work at Warner Bros. Studios Leavesden – where Zack Snyder also filmed the Warner Bros/DC movie Justice League – and there was extensive location work in and around London.

“Due to Warner Bros. having invested heavily in Leavesden Studios, the natural decision is normally to shoot large films in the UK,” says Charles Somers, the film’s supervising location manager, in comments to The Knowledge.

“There is a generous tax incentive combined with a huge pool of talent – the UK crews being some of the best in the world. In addition to this, part of the film was set in London in 1918, and whilst London has undergone a modern transformation in recent years, there is still much of the city which looks the same as it did 100 years ago.”

Two platforms at Kings Cross Station were shut to double for Paddington Station, given that more remains of Kings Cross’ historic architecture. Period-appropriate train carriages were transported from a nearby heritage railway for filming.

Popular movie location Bourne Wood in Surrey stood in for Belgian story settings and Arundel Castle in West Sussex doubled for a Belgian chateau used by German forces during scenes where Diana fights with the Allies. Western Front trench sets were built on Leavesden’s back lot.

Somers and his team also negotiated the closure of Trafalgar Square in central London for a few brief hours on a Sunday morning for scenes set during Armistice Day celebrations in November 1918. The tight filming window meant the entire location had to be wrapped in a blue screen in just 15 minutes. 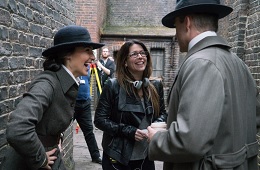 Location manager Georgette Turner was called on to organise these scenes. She had previous experience, having closed the iconic square a few years earlier for Tom Cruise’s sci-fi war movie Edge of Tomorrow.

That specific shoot also marked the first time a military helicopter had been landed in Trafalgar Square during peacetime.

“There are very strict guidelines from the Greater London Authority, Transport for London (TFL) and Westminster Council that we have to comply with,” Turner tells The Knowledge.

“We had to make sure we didn't disrupt local businesses, work with TFL to arrange bus diversions, work with highways for installing a temporary road on the square and all sorts of other wonderful things!

“We were very fortunate to have the support of James Waller (Film London) and Keith Elliott (a former Metropolitan Police official).

“London is such a welcoming city and although there are strong guidelines in place for filming, with the right planning it can be an absolutely incredible experience.”

The UK continues to be one of the world’s top filming locations for big-budget movies due to its filming incentive support, studio infrastructure and experienced crews.

Scenes set in Diana’s idyllic home land of Themyscira were shot on location on Italy’s Amalfi Coast. For more details on the Italian leg of the shoot click here.