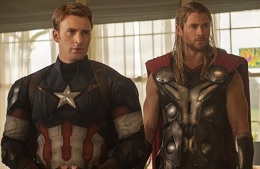 The co-director of Marvel’s superhero movie Avengers: Infinity War has said the film may well have spent longer shooting in Scotland if more studio space had been available.

Joe Russo is co-directing the big-budget film with his brother Anthony. The production team recently wrapped four weeks of location shooting in Scotland that focused on Edinburgh.

“Because of the UK tax rebate and because of the look you can achieve – which is difficult to find elsewhere: the geography is quite beautiful and quite complex and you can get a varied number of looks within a short travel distance – I think that Scotland is uniquely positioned to attract quite a large amount of work if they were to open sound stages,” Russo told regional media organisation Johnston Publishing.

“In fact, we probably would have done a lot more work here in Scotland had there been facilities to support our stage work.”

The Avengers follow-up is thought to have spent around £10m filming in Scotland, although this was just a fraction of the movie’s overall budget. Production on the film is based in Atlanta in the US state of Georgia.

In 2015 the economic impact of film and TV production in Scotland came to just over £50m, but Scotland’s overall share of UK production is just 2.5%.

“In Scotland we have Wardpark Studio which is brilliant – thank goodness we have this – and other than that we have various sheds, which get converted for a short period of time while a film uses it and then they are set back to normal,” said Rosie Ellison, film manager of Film Edinburgh, in evidence given to Holyrood’s Culture, Tourism, Europe and External Relations Committee.

“That's one of the reasons we haven't been able to get more of the £2bn that is available out there [in the UK] – we haven't got the studio infrastructure [in Scotland].”

Pentland Studios was recently approved for planning permission in principle as a privately-funded studio complex outside Edinburgh. The Scottish government is also under pressure to deliver a purpose-built, publicly-financed facility.