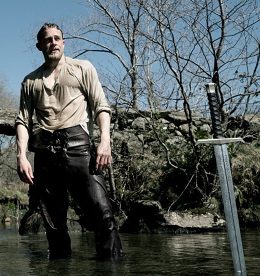 Filmmaker Guy Ritchie shot King Arthur: Legend of the Sword from a base at Warner Bros. Studios Leavesden and also used locations in Wales.

The period movie is a new adaptation of the English myth and follows young Arthur as he is forced to confront his destiny and challenge his uncle for the country’s throne.

Three key sets were built at Leavesden to create the run-down city of Londinium, the kingdom of Camelot and an enormous cave setting beneath.

These key sets were altered and adapted to form around a dozen separate story spaces.

“Gemma and I felt that the landscape should be one with dramatic, barren vistas that wouldn’t have changed for centuries, so the challenge was finding that in today’s [British] countryside, which has had centuries of partitioning and farming,” says Stevens.

The locations team spent six months negotiating with environmental advisor National Resources Wales to build sets in Snowdonia, which is designated as a site of special scientific interest.

Scenes were also shot in the Forest of Dean on the Welsh-English border and on the Isle of Skye west of the Scottish mainland.

Wolf Studios Wales will host production for Bad Wolf’s upcoming high-end dramas A Discovery of Witches and His Dark Materials.