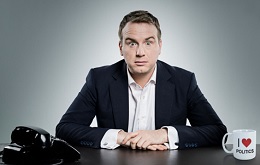 Studio-based political satire Unspun with Matt Forde has been re-commissioned for two further series, the next of which will tackle the lead-up to next month’s general election on 8 June.

Unspun is produced by Avalon Television and hosted on Dave by comedian Matt Forde.

Filming takes place on the day of broadcast to ensure it stays as topical as possible and can respond to the day’s top political news stories.

With the UK’s main political parties’ election campaigns now in full swing, there will be plenty of material and indeed the new series will be broadcast twice a week.

“Dave is putting Unspun at the heart of its schedule and blazing a trail in the satirical space,” said Hilary Rosen, deputy director of commissioning at Dave.

“Matt Forde is the best in the business - there's no one else out there who is as funny and knowledgeable about the state of British politics. This will be required viewing in the run up to 8 June. Who better to help us make sense of the forthcoming election campaign?”

Unspun is designed to be similar in tone to the hugely successful Last Week Tonight with John Oliver in the US, which is also produced by Avalon for HBO.

Both the BBC and ITV have also announced a series of live televised political debates to be held in the coming weeks as part of their current affairs schedules in the build-up to 8 June.