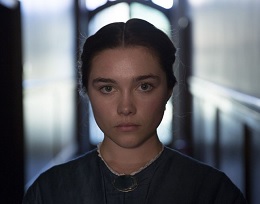 Based on a 19th century novella by Nikolai Leskov, Lady Macbeth has no connection to Shakespeare’s infamous character.

Instead, the story recalls the spirit of Shakespeare's character and tells the tale of a young woman forced into a loveless marriage who starts an affair with a young estate worker.

“We were so lucky to be able to use it,” said director William Oldroyd of Lambton Estate, in comments to the Sunderland Echo.

“Because it’s in the middle of Durham, Newcastle and Sunderland, it was easy for the crew to get to and, because it’s closed to the public, we were able to set up a small studio there for the 24 days of filming.

“The entire film was shot there, aside from a day on location at Seaham Beach, Gibside and Cow Green Reservoir in the North Pennines.”

Lambton has been used as a filming location before, including for a BBC adaptation of The Paradise, a drama set in a department store in the 1870s.

North-eastern England is steadily growing its UK production profile and now offers Church Fenton Yorkshire Studios, an adapted filming facility that has been home to the ITV period drama Victoria.