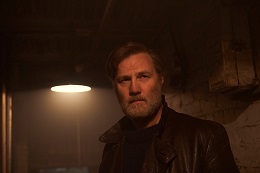 Original and continuing TV dramas have gone into production in Liverpool, beginning a busy spring of location filming for the city.

Mammoth Screen is filming an adaptation of China Mieville's novel The City & The City (pictured), a fantasy crime series set in two contrasting cities that occupy the same physical space.

“Filming in Liverpool is a great experience,” said Betsan Morris Evans, a producer on the project.

“The city has a wealth of fantastic, versatile locations - both interior and exterior. The film office has supported our production fully – nothing is too much trouble and they have impressed me with their amazing can-do attitude. I would come back here every time if I could.”

Big Talk Productions is also filming locally for Timewasters, a comedy series about the members of a modern-day four-piece south London jazz band who find themselves transported back in time to the 1920s. Liverpool stands in for London.

Returning to Liverpool is the high-end period gangster series Peaky Blinders, which charts the rise of the Birmingham-based street gang from the early 1920s and has proved a big hit for the BBC.

“The Liverpool Film Office continues to work with all filmmakers to ensure they experience the best that the Liverpool City Region has to offer,” said councillor Wendy Simons.

Simons also offered an update on plans for Liverpool’s former Littlewoods Pools building, which is being adapted into a production facility.

“We are very excited to watch our ambitions for the former Littlewoods site come to fruition later this year, so productions have the opportunity to stay longer to utilise all the support businesses we hope to see setting up on the site,” Simons said.