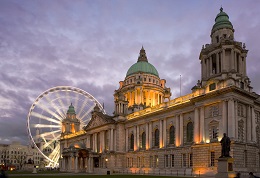 The BBC has pledged to spend an extra £11m on its Northern Ireland (NI) services over the next three years.

Improvements will include a 50% increase in local commissioning to cover drama, comedy and factual programming – including extra content to mark historical anniversaries – and an enhanced digital service for BBC News NI.

In addition to the funding pledge, the BBC has renewed a partnership agreement with Northern Ireland Screen. A deal was first signed in 2015 and led to acclaimed productions like crime dramas Line Of Duty and The Fall.

“It is the biggest single investment the BBC has made in Northern Ireland in 20 years. It will transform our digital output - for news and sport and more.”

The news comes a few weeks after the BBC made similar pledges of funding increases for both Wales and Scotland, with the latter securing the largest figure – an extra £19m – most of which will be used to fund new channel BBC Scotland.

Earlier this week the communications regulator Ofcom revealed it will be compelling the BBC to ensure that at least half of its programming is made outside London.