Ben Wheatley filmed on location in a warehouse outside Brighton for his US-set shootout movie Free Fire.

Set in Boston in 1978, the film follows two rival groups of gangsters during an illegal arms deal gone wrong, who must shoot their way out of a remote warehouse.

“The process started with what on paper seemed a fairly straightforward brief - to find a massive, empty industrial warehouse,” says James Player, the film's head location manager, in comments to The Knowledge.

“Ideally we wanted a huge space that was already derelict as a starting point for the set dressing. We started looking across the country at vacant industrial sites, military bases and aircraft hangars trying to find anything with the right look.

“The most important thing initially was to find the biggest space possible, as a shootout taking place in a more confined space would seem unrealistic.

“After making enquiries across the whole country we eventually stumbled on an empty newspaper printing factory in Brighton, just a few minutes from Ben’s house. It had recently been vacated by the local paper and gave us a huge blank canvas in which to go wild.”

Wheatley’s production team made huge changes to the location – two adjoining warehouses and a basement – by first clearing out the remnants of its past life as a printing press and generally making the space safe for cast and crew.

“Once the initial safety elements had been put in place we began the task of altering the space to suit the needs of the story,” Player says. “Holes were knocked through walls to allow action vehicle access, whole sections of office were pulled down and removed, and the loading bay was cleared out to enable our trailers to park adjacent to set for the whole shoot.”

Physical set dressing for the film involved using more than a hundred tonnes of a building material known as hardcore, and then gravel on top of that, to turn the white warehouse interiors into the dirty location that was to be the story’s setting.

“Each stage had to be proposed to the building owners and approved one step at a time,” says Player. “Over the course of the shoot we fired thousands of rounds of ammunition, blew stuff up [and] carried out car stunts and fire effects, so it was a big deal for them to agree to the scale of the project.

“Once we’d wrapped, the whole site had to be cleared and reinstated to its original condition including a full repaint. Within a week of us finishing filming the whole place was painted bright white and the shiny floors returned, with no sight of the chaos that had been happening inside over the weeks before.” 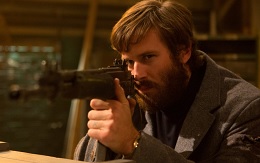 Free Fire was also part of a pilot sustainable-filming scheme run by Film London in co-ordination with environmental consultancy Greenshoot.

“The firm that removed the construction waste from the warehouse was approved by Greenshoot, conforming to stringent recycling standards,” says Paul Evans, of Greenshoot, in comments to The Knowledge. “The Environmental Management System was tailored to that specific environment.”

More productions are looking to reduce their carbon footprints and so Greenshoot’s training is becoming popular among UK crew keen to improve their skillsets.

“Our one-day Green Steward training class is always oversubscribed, with production runners seeing this as another skill to help their chances of employment,” Evans says.

The Green Screen programme was recently expanded to utilise the skills and knowledge of eight European countries with funding from Interreg Europe.