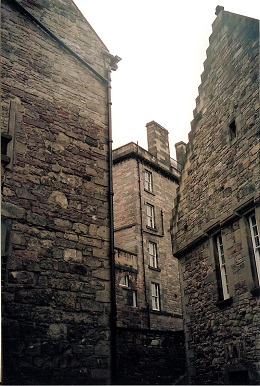 “When Edinburgh came up as a location option we jumped at the chance,” said Joe Russo, who co-directs with his brother Anthony. “The city is such a unique and iconic location, but one never seen as the backdrop for a big action film, which is incredibly exciting.”

“The support from all local agencies, such as Film Edinburgh, has been invaluable in helping to coordinate this complicated shoot,” said Anthony Russo. “We appreciate the entire city’s help and are excited to have such a beautiful and historic city in the film.”

The shoot has taken a year to plan and has been assisted by regional agencies including Creative Scotland and the City of Edinburgh Council.

Preparations have involved wrapping part of Waverley Station in a huge green screen to aid visual effects in post-production.

“This is the biggest production to ever film in the region,” said Rosie Ellison, film manager for Film Edinburgh. “But crucially it also clearly demonstrates Edinburgh has the infrastructure and process in place to accommodate major filming of this scale.

“The reinforcement of the Edinburgh Film Charter, which was ratified again a few years ago, has played a massive role in simplifying procedures and allowing the city to gear up and facilitate productions of all sizes.

“Film Edinburgh and the Council have worked closely with the filmmakers for over a year to co-ordinate the smooth running of the location shoot in the region. The production team has been a pleasure to work with and have been considerate of the impact of filming on local business, visitors and residents.”

Location filming in Edinburgh rose by just under 12% in 2016 and shooting for Avengers: Infinity War is likely to drive a production spike for this year. The challenge will be to turn this increase into a long-term trend.