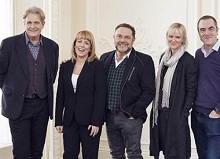 The sixth series of Stella and the second series of Cold Feet began shooting Monday 27 February.

Cold Feet was revived for ITV by Big Talk Productions, revisiting the characters 13 years after the end of the original run. The eight-episode run launched with ratings of more than six million in early September last year.

Mike Bullen once again writes the new eight-episode run which is based at Manchester’s The Space Project over the next four months. Terry McDonough directs.

Cameras have also started rolling on the sixth series of Stella, with Ruth Jones reprising her role as the eponymous 40-something mum.

Set in the fictional Welsh town of Pontyberry, the Sky 1 series is largely filmed on location in South Wales including Ferndale in the Rhondda Valley. It comes from Tidy Productions, the shingle founded by Jones and her husband, producer David Peet, in 2008.

PI subscribers can find a round-up of main hires on the site, including the directors, production designer, production co-ordinator, casting director and line producer.