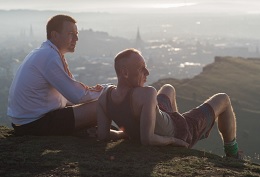 Filming for Danny Boyle’s movie T2 Trainspotting helped drive an 11.5% increase in production spending in Edinburgh in 2016, according to new figures from Film Edinburgh.

Nearly £8m was fed into the local economy through the course of the year, with T2 Trainspotting (pictured) – a sequel to 1996’s Trainspotting – filming in more than 50 Edinburgh locations over its three-month shoot last spring.

“From the first stages of pre-production, Film Edinburgh was on hand to support and advise our locations team, working closely with us to facilitate filming with the council and local community,” said Boyle.

“The goodwill from local individuals and organisations towards the production made it an absolute pleasure to be back filming in the city. Thank you to the Film Edinburgh team for having our back.”

Other productions filmed in 2016 included the BBC’s university drama Clique, feature film Churchill with Brian Cox as the eponymous wartime leader, and the historical TV drama Outlander. However, the number of filming days in fact fell compared to the previous year, despite the overall increase in production spending.

“The next step to secure our future development and success would be the investment in Edinburgh film studio facilities,” said Rosie Ellison of Film Edinburgh.

“This remains critical in strengthening the city’s filming offering and reputation as a film-friendly city, allowing more companies to choose Edinburgh as a filming base.”

Scotland does not yet have any large-scale purpose-built studios, despite continuing pressure from the country’s production industry. A privately-funded filming facility has been proposed outside Edinburgh, but local authorities have delayed a development decision.

International production spending also rose in the UK as a whole last year, with film project spending increasing by nearly 20% on 2015 figures.