Emma Stone to film The Favourite in UK 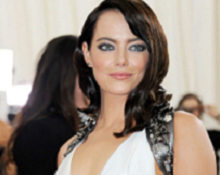 Emma Stone, Olivia Colman and Rachel Weisz are gearing up to star in The Favourite, a period drama from The Lobster collaborators Element Pictures and director Yorgos Lanthimos.

The film was originally scheduled to begin filming last year – it was first listed on Production Intelligence in November 2015 – but is now in active pre-production and scheduled to begin principal photography in March with much of the location work taking place at Hatfield House, Herts.

PI subscribers can log in for details on the shoot dates and key UK hires including the line producer, casting director, production designer and location manager.

The screenplay is by Deborah Davis and Tony McNamara, and centres on the behind-the-scenes politics during the reign of Queen Anne at the start of the eighteenth century.

Emma Stone is also lining up to play Cruella de Vil in Disney’s film about the villain from 101 Dalmatians. PI subscribers should log in and follow the project, as there will be more news soon on HoDs, dates and locations.

Rachel Weisz, who also worked with Lanthimos on The Lobster, is currently filming Disobedience in north London; full details are listed on PI.