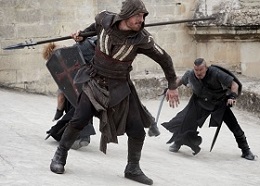 New action movie Assassin’s Creed filmed its studio work at Pinewood Studios near London and also filmed scenes on location in the streets of the capital.

The film is based on the hugely popular videogame franchise of the same name and stars Michael Fassbender as a modern-day criminal forced to re-live the experiences of his assassin ancestor in the late 16th century.

The Freemasons’ Hall on Great Queen Street became a key location for the shoot. Action scenes were filmed inside and exterior shots showcased the building’s 1930s architecture.

“Freemasons’ Hall is a very popular film location – and given its imposing look, it’s easy to see why,” said Karen Everett, managing director of FilmFixer, which helps facilitate location filming in London through local film offices.

“Managing 400 cast and crew with minimal disruption was possible thanks to good planning and a considerate production team. The building truly does the movie proud.”