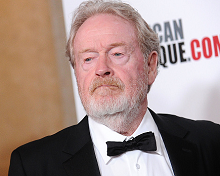 Ridley Scott, currently working on the Kenneth Branagh-directed Murder on the Orient Express, is preparing for a European shoot on The Aftermath starring Keira Knightley and Alexander Skarsgard.

Principal photography on the Scott Free Productions feature is due to begin early next year in the Czech Republic and Germany; with a handful of key UK HoDs on board, most crew members are being sourced locally.

Scott is producing, while James Kent is directing the period drama from a screenplay by Anna Waterhouse and Joe Shrapnel, adapted from Rhidian Brook’s novel. A British colonel and his wife are reunited in post-war Hamburg as they are sent to live in a requisitioned house as reconstruction of the city begins. Tensions rise as they share the house with its German owner and his troubled daughter.

Knightley has been busy filming her role of the Sugar Plum Fairy in The Nutcracker and the Four Realms – we first broke the news that the feature would be filming here in the UK back in May.

For more on the projects listed above, log into Production Intelligence, our subscription service currently celebrating its fifth birthday with more than 8040 titles listed.