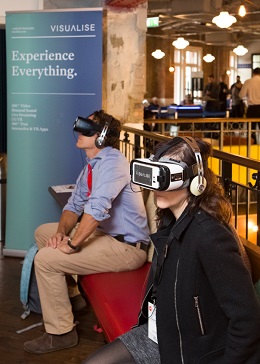 Virtual reality (VR) technology is in its early stages of development but has the clear potential to revolutionise the way we experience events and storytelling, the Virtual Reality Creative Summit 2016 has shown.

The summit was held last week in central London by The Knowledge’s partner companies Broadcast, Screen and shots.

Several of the UK’s major broadcasters delivered revealing presentations, as did companies such as Google and technology company AMD.

Consumer VR experiences centre on headsets (pictured) that immerse the user in a digital environment with a 360-degree viewpoint.

Content is largely short-form and relatively simplistic in nature, with providers generally prioritising the provision of a high-quality immersion experience above narrative content.

One of the central concerns right now is that consumers will have a bad first experience of VR and will be discouraged from ever trying it again.

Lower-end VR experiences can sometimes induce nausea - something that content providers need to be wary of - but it's also clear that VR environments don’t need to be photorealistic in order to prove immersive in just a few short minutes.

In The Knowledge’s view, virtual reality has clear parallels with the progression of the IMAX big screen format. IMAX found its initial success with short documentaries specifically designed to showcase the immersive nature of the massive format – ten times the size of 35mm celluloid – and booming sound.

It was several years before blown-up screenings of big-budget Hollywood movies became major events and began to dominate IMAX schedules around the world.

Virtual reality is arguably in this stage now. The format remains firmly in the test phase, with manufacturers and content providers understandably focussing on developing the best technology rather than worrying too much about how best to monetise it in the long-term.

Sporting events and promotional campaigns that hinge on broad visuals and tense atmosphere are currently the most obvious natural fit for VR presentations. Broadcaster Sky is ideally suited to experiment as its VR division has access to all the channel’s content. Indeed, Neil Graham and Richard Nockles of Sky VR Studios confirmed at the summit that programming that’s already popular through conventional viewing has also transferred well to the more immersive environment.

Experiencing scripted drama through VR is going to be much more of a challenge to work out as the specific rules of production are firmly in the experimental stage. 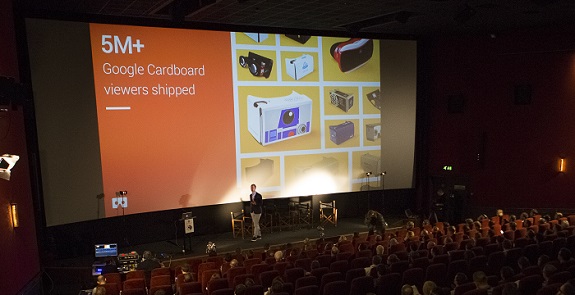 The process will need to be more refined than the relatively straightforward approach of setting up a 360-degree camera in a football stadium and filming the action as it unfolds. In standard screen formats the director’s decisions steer what the viewer sees and ultimately impacts the meaning of the drama, be this overt or less perceptible. While VR removes the final barrier between the content and the consumer, specific dramatic focal points are lost as viewers becomes more autonomous in how they choose to experience the story.

While some of the summit panellists noted that major manufacturers seem happy to launch headsets that are essentially ‘beta’ versions of what the technology is likely to become in a few short years, other organisations are biding their time.

The National Theatre is working on long-form content ideas for VR but is waiting for the technology to reach the required standard. Similarly, the BBC is investigating the medium’s potential for educational programming. The corporation’s research has found that audiences have strong emotional responses to history content presented through VR and footage from the BBC’s stylised VR project Easter Rising: Voice of a Rebel impressed The Knowledge.

Panellists seemed to agree that major steps forward will be seen in VR within the next three to five years, and on the strength of the material presented in this summit, the technology could prove to be very exciting indeed.