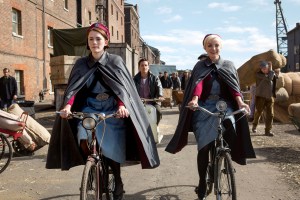 Organisations such as Creative England and the Kent Film Office have ensured around £25m was injected in Kent's economy through film and television productions over the past five years, figures released by the film office reveal.

TV series such as Call the Midwife (pictured), Downton Abbey, The Royals and Mr Selfridge all shot parts of their production in the area.

Popular sites in Kent include the Chatham Historic Dockyard, Penshurst Place and the white cliffs of Dover.

Talking to KentOnline, Gabrielle Lindemann, film officer at Kent County Council, said: "The Kent Film office is there to bring investment into the county from film and TV activity.

“We think it's quite an important part of the Kent economy because all of the money gets spent directly with residents and businesses and, of course, the healthier the economy is, the better it is for the county."

Producers looking to shoot in the area will find that Kent has over 500 registered sites available for filming.

One film liaison officer told KentOnline that filming in the county is gaining momentum on London, as places which productions only a few years ago could have filmed at in London, have been demolished or altered. Kent's landscape and infrastructure still offers those productions, such as Call the Midwife, an authentic feel.

One of Kent's most popular and recognisable locations is Chatham Historic Dockyard, which has been featured in films and television productions including the popular Downton Abbey and Foyles War.