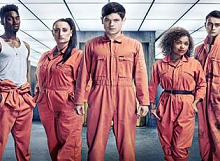 A new comedy drama for E4, Aliens, is nearing pre-production with shooting set to begin in London and Bulgaria towards the end of August.

From Misfits producer Clerkenwell Films, the 6 x 60 centres on Troy, a segregated community where aliens live in a chaotic and dangerous ghetto behind a vast wall. When Lewis, a mild-mannered human who works as a checkpoint guard, discovers he is half alien, he becomes drawn into the hedonistic sub-culture on the other side.

The screenplay is by Fintan Ryan (In the Flesh); Matt Jarvis, Murray Ferguson and Petra Fried executive produce. Charlie Leech is the producer.

For more on Aliens, including shoot dates, line producer and, from 11 July, location manager, production co-ordinator and production designer, log into Production Intelligence.