David Tennant to star in Metanoia 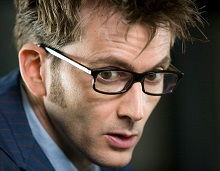 Metanoia will reveal the story of R.D. Laing, a psychiatrist known as one of Scotland's greatest thinkers. Working out of Kingsley Hall - situated in East London - throughout the 1960s and 1970s, Laing performed various daring experiments on people who were at the time known as disturbed.

His methods included using LSD and a type of self-healing, known as metanoia, much to the dismay and outrage of the psychiatric community.

Tennant said of the project: "'I have long been fascinated by the life and work of R.D. Laing. This is a wonderful opportunity to celebrate and discover this important man and I am honoured and thrilled to be involved in telling this story. [Director] Robert Mullan's passion for the subject is inspiring and the presence of the brilliant Elizabeth Moss makes this something I cannot wait to start work on."

Shooting is scheduled to take place early next year at MMC's studio in Cologne and on location in London.

Executive producer on the film, Peter Dunphy, also remarked: "I'm delighted to have the privilege to produce such a unique and important film of a story that has been waiting to be told."