A buyer's guide to monitoring systems

It's difficult to do precise camerawork without being able to see an accurate picture. There are various aspects to the accuracy of an image, including colour, contrast and resolution, and perhaps the most important thing about monitoring equipment is knowing which aspects of its picture are actually reliable.

Even so, monitors are still an investment likely to outlast cameras, especially since basic beyond-HD displays are priced for the consumer market and can be affordable. The best displays, however, are worth more than - for instance - the best DSLRs, and would represent a more careful investment.

Perhaps the most basic option is a simple computer monitor. With many cameras offering HDMI outputs, these can often be directly connected or used with an HDMI to SDI converter such as those from Blackmagic or AJA. The problem is that since there aren't yet consumer priced OLED displays, all computer monitors are TFT, a liquid crystal display based on pocket calculator display technology.

Practically no TFT display is capable of truly accurate contrast, although they are adequate for all but the most precision reference situations and most of the displays currently in use in film and television are TFT.

It's important not to be misled by marketing, since devices described as "LED monitors" are invariably a TFT panel using an LED backlight. This can be valuable, since LED backlights draw less power than the cold-cathode fluorescent tubes used in older display, making it easier to power a field monitor using a large 12-volt battery and a mains inverter. It shouldn't, however, be confused with the OLED displays used in high-end monitors, which are an entirely different technology.

As we've seen, TFT monitors cannot generally produce perfectly accurate contrast, although it may be possible to calibrate them for greater accuracy using external devices. While any mention of particular model numbers would date quickly, it's worth being aware that there are several subtypes of TFT. In particular IPS (for In-Plane Switching) types have perhaps the best performance in terms of visible colour shift when viewed from acute angles, and better colour reproduction. This information should be available from a manufacturer but it is often obvious when viewed in comparison with a non-IPS type. 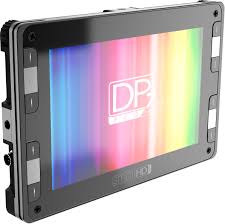 A TFT panel of sufficient resolution to show every pixel of the camera's output - and which has been properly set up to do so - will accurately show sharpness and usually noise. It will not accurately show colour, both because computer displays use the sRGB colour standard and not the Rec. 709 most commonly used in film and TV work, and because as a TFT panel it intrinsically lacks contrast.

The most affordable solution, solving both the colour-standard and intrinsic accuracy problems, is probably something like the SmallHD DP7 (around UKÂ£1100). This is a seven-inch display and therefore has a resolution of only 1280 by 800 pixels, but it is available in either TFT or an only-slightly-more-expensive OLED version. Either may be conveniently battery-powered and mounted on camera.

There are currently only two ranges which solve both the resolution and colorimetry problems for HD images, and only one for 4K. They are all based on OLED display panels manufactured by Sony, the only company which currently makes these components, which Sony build into monitors and sell as their Trimaster EL range.