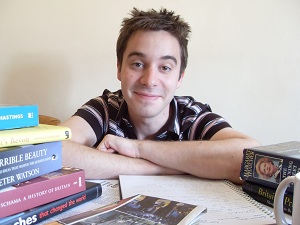 We take a look at the busy diary of playwright turned screenwriter James Graham.

If you're a subscriber to Production Intelligence, you may have noticed a writer credit cropping up with regularity recently.

James Graham is a name to watch - at the age of just thirty, he has successfully made the transition from playwriting to screenwriting with several TV credits under his belt and a feature film currently in development with the mighty Weinstein Company.

Graham is already an acclaimed playwright - his This House transferred from The Cottesloe to The Olivier - and he has writtenÂ Finding Neverland which transfers from Boston to New York in the spring,

Among his early TV credits was Caught in a Trap, broadcast in 2008, after which he went on to pen episodes of The Secret Diary of a Call Girl and Prisoners' Wives. He is currently working on original series and adaptations with Tiger Aspect, Left Bank Pictures, Kudos and the BBC.

Graham is also the brain behind Coalition, a feature-length drama which has just gone into production and which stars Bertie Carvel as Nick Clegg and Mark Gatiss as Peter Mandelson.

In July last year, filming began on Origin Pictures' X + Y, a feature from director Morgan Matthews currently creating a lot of industry buzz. Graham wrote the screenplay: a rites-of-passage story which centres on a group of gifted teenagers competing at the International Mathematical Olympiad. Asa Butterfield stars alongside Sally Hawkins, Rafe Spall and Eddie Marsan. The film was shot in Sheffield, Cambridge and Taiwan.

Staying with feature film, Graham is now working on Gypsy Boy, a feature film currently in development at BBC Films. The project is an adaptation of Mikey Walsh's memoir of growing up in a Romany community and is working towards a 2015 shoot.

And that's not all, the screenwriter has also adapted William Kuhn's novel Mrs Queen Takes the Train, which imagines a time when Queen Elizabeth, driven by boredom, wanders out of Buckingham Palace in search of freedom and fun. The project is being developed by the hefty Weinstein Company.

It seems that Graham's star is very much in the ascendant - we say long may it last.

More on the titles mentioned above can be found on Production Intelligence, our online database of advance and archive productions. To order, click here.