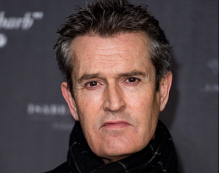 A stellar cast is gathering for The Happy Prince, a feature film written and directed by, and starring, Rupert Everett.

The film comes from well-known producer Robert Fox, of the famous Fox dynasty. His company has recently been joined on this one by co-production partners BBC Films, Lionsgate and Raindog Films, Colin Firth and Ged Doherty's shingle.

It will come as no surprise then, that Firth himself is now on board to star in the film, along with Hugh Dancy, Emily Watson and Tom Wilkinson. The film is very much Everett's baby - he has been developing it for some years and it marks his feature directorial debut.

Everett plays the iconic Irish writer and wit Oscar Wilde, with particular emphasis on his last days when, suffering from ill health, the venerated poet looks back on his eventful life. Dancy portrays his friend and unrequited love Robbie Ross.

Filming will take place in the autumn in the UK, Italy, France and Germany.

Further details on The Happy Prince can be found on Production Intelligence, our online database of advance and archive productions.