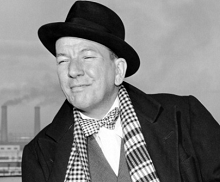 Â We spoke to Stephenson who told us that Sherman's screenplay for Noel (working title) will concentrate on the playwright's life between the ages of 15 and 24. Stephenson has been developing the project for some time, and is joined on the film by fellow producer Julia Valentine. A late summer shoot in and around London is currently on the cards.

Further details on key hires such casting director are on Production Intelligence, our online database of advance and archive productions.