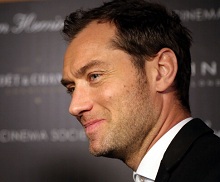 The actor will join fellow A-listers Colin Firth and Nicole Kidman - the pair have been working together a lot recently, on The Railway Man, Paddington and Before I Go to Sleep. Law replaces Michael Fassbender, who was originally lined up and who has just finished working on Macbeth with Marion Cotillard.

The film is based on A. Scott Berg's biography Max Perkins: Editor of Genius, and centres on Max Perkins (Firth), the renowned literary editor whose authors included F. Scott Fitzgerald and Ernest Hemingway. However, it is his friendship with novelist Thomas Wolfe (Law) - considered one of the US' most important writers of autobiographical fiction, that will provide the foundation of the forthcoming feature.

Seasoned screen scribe John Logan (Penny Dreadful, Skyfall, Hugo) has adapted the screenplay, with shooting due to commence in the final quarter of this year.

Further information on Genius can be found on Production Intelligence, our online database of advance and archive productions.