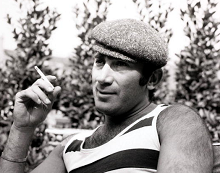 Legendary composer Lionel Bart is to become the subject of a new musical feature film, Consider Yourself. Bart created the book, music and lyrics for Oliver! which, since its West End premiere in 1960, has barely been off the London stage.

It flourished on Broadway too in the early 1960s and was made into a film in 1968. But Bart's output far exceeded the success of Oliver! - he was also a prolific pop composer, responsible for such hits as Living Doll and From Russia with Love, and garnered nine Ivor Novello awards.

The forthcoming musical biopic, which will use Bart's own songs to illustrate his life story, comes from The Mob Film Company and is produced by the company's Vadim Jean, Ian Sharples and Paul Brooks. Jean will also direct. Geoffrey Rush is attached to play the composer in his later life.

We spoke to Sharples about the film, who agreed that Bart's rags-to-riches story is crying out for the big screen treatment: "There's a huge part of the theatre industry for whom Bart is simply an idol - that goes for crew behind the curtain as well as cast out in front on stage. In fact, you'd be hard-pushed to find an actor who hasn't been in Oliver! at some point in their career, from junior school productions to West End revivals."

Further information on Consider Yourself can be found on Production Intelligence, our online database of advance and archive productions.