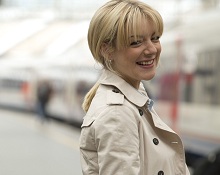 Legendary Liverpudlian entertainer Cilla Black is to be the latest in Sheridan Smith's canon of portrayals of real-life figures.

Filming starts in the middle of March on Cilla, a three part drama from ITV Studios about the life of the flame-haired chanteuse and presenter. It will chart her rise to fame - from the typing pool to friend of the Beatles and one of the most recognisable faces and voices in the country.

The drama is written by seasoned scriptwriter Jeff Pope, who also executive produces. Kwadjo Dajan produces, with Paul Whittington at the helm to direct. Unsurprisingly perhaps, the majority of filming will take place in Liverpool.

Smith says of the role: "I am thrilled to be playing Cilla, as she is a British icon. In the 60s, as a young girl from Liverpool, she had numerous number ones and sang with the Beatles, her life story is fascinating."

The drama reunites Smith with Pope, Dajan and Whittington, all of whom worked on the acclaimed drama Mrs Biggs, in which she starred in the title role of the wife of notorious Great Train Robber Ronnie.

The actress will also play another non-fictional figure later this year when she portrays Lisa Lynch, the blogger and author who died of cancer last year aged just 33, in forthcoming BBC Drama The C Word.

Further information on Cilla, The C Word and Mrs Biggs can be found on Production Intelligence, our online database of advance and archive productions.