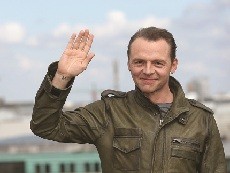 Filming begins later this month on romcom Man Up, the latest feature from Big Talk Productions.

The film, written by Tess Morris, stars Simon Pegg and American actress, writer and director Lake Bell (In a Worldâ€¦) as two people who accidentally become a couple after a blind date mix-up.

Pegg has no time to rest on his laurels as he has plenty of projects lined up for 2014. Next to film after Man Up is Absolutely Anything, the upcoming feature from director Terry Jones which re-unites the Pythons (voices only this time) in a feature about a schoolteacher (Pegg) who is given special powers by a group of aliens (Jones, John Cleese, Terry Gilliam and Michael Palin).

He is then reported to be joining Tom Cruise in the latest instalment of the high-octane spy franchise, Mission: Impossible 5, due to shoot later this year.

Further information on Man Up and the other films mentioned above can be found on Production Intelligence, our online database of advance and archive productions.