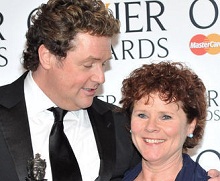 Filming is due to get underway early in the New Year on Tubby and Enid, the latest offering from writer/director Victoria Wood for BBC Two.

It is based on That Day We Sang, a play with songs that Wood created for the Manchester International Festival in 2011, which is being revived this year at the city's Royal Exchange.

Set in the late 1960s, it follows Tubby and Enid, who had sung together in children's choirs in Manchester in the 1920s and who meet up again four decades on as a TV crew follows the choir for a documentary. Michael Ball and Imelda Staunton star.

Further information on Tubby and Enid can be found on Production Intelligence, our online database of advance and archive productions.