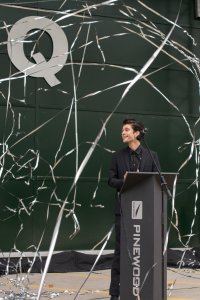 Despite being denied planning permission for an expansion, Pinewood Studios has created a new studio facility for both film and television production.

The new set is named Q Stage and was formally opened by Ben Whishaw, who was the last actor to play Q in the Bond series.

The facility, which was completed in late September, comprises a 30,000 sq ft stage and 15,000 sq ft of production accommodation and workshops. The first project to move into the Q Stage is a large, inward investment film.

In recent years Pinewood has been host to films such as Les Miserables and Jack Ryan, and currently the studio group hosts The Avengers: Age of Ultron, The Woman in Black: Angel of Death and the latest Star Wars film, Star Wars: Episode VII.

Producers of the Bond films, Barbara Broccoli and Michael G. Wilson, were in attendance during the opening of the stage. Their presence and the name of the new stage are odes to the studio group's longstanding relationship with Ian Fleming's Bond film legacy. Other Pinewood landmarks include the 007 Stage, 007 Drive, Goldfinger Avenue and Broccoli Road.

Director of strategy and communications at Pinewood Shepperton, Andrew Smith said: "Pinewood continues to invest in its infrastructure to ensure it offers all types of production the most state-of-the-art, secure and flexible stages possible. It is even more special to have Barbara Broccoli and Michael G. Wilson here to help celebrate and it underlines the very special relationship Pinewood and Eon Productions enjoy."