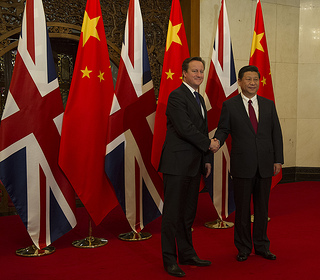 At an industry event on Monday (2 December) the BFI's head of international, Isabel Davis, told an audience of British film professionals that a co-production treaty between the UK and China was getting "extremely close".

With Amanda Nevill, the BFI's chief executive, currently in China as part of Prime Minister David Cameron's large trade mission of 120 business leaders to the Asian nation, questions quickly focused on the possibility of a memorandum of understanding between the two territories when it comes to filmmaking. Davis announced that a cultural agreement had already been signed and a co-production treaty was therefore likely to be not far away.

"A cultural agreement has been signed, with the intention to sign a co-production agreement. We're extremely close," Davis said.

The potential of the Chinese market is huge but currently only 34 productions from overseas are allowed to be screened there each year, almost half of which need to be 3D or IMAX versions.

However, under the proposed new treaty, British co-productions would qualify for release in China without having to fall within that same category. This would also allow for easier access to equity.

What would be key, Davis said, is trying to figure out each other's audience tastes. "We'll first spend some time figuring this out," she said, "I don't expect it to go so soon."