The battle of the Christmas ads has officially started 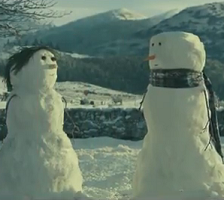 Every year there are two adverts that deserve a gala preview press screening (yes, really) and they are generally aired in the final months of the year. You might have guessed what I am talking about now - indeed, the Marks & Spencer and John Lewis Christmas ads.

The two long-awaited commercials generally cost millions - whether they are produced in 'times of austerity' or not - and the idea is that this is a lot less than the cash they will eventually produce in Christmas shopping revenue.

Last year John Lewis won hands down from its nemesis when the company's beautiful Snowman ad (The Journey) went viral on Twitter and Facebook. M&S's 2012 advert entitled The Greatest Hits This Christmas opted not to have celebs in it for the first time in ten years and though it had great music and choreography comparable to a Beyonce video (they shared the same director, Jake Nava) it failed to capture the larger audience in the same emotional way as John Lewis did.

But this year Marks is ready to fight back big as they are preparing to launch their new commercial on ITV onÂ Wednesday 6 November, primetime (obviously).

The cast will include none other than British film diva Helena Bonham Carter and models Rosie Huntington-Whiteley and David Gandy. Directed by the Swedish Johan Renck - who previously made music videos for Madonna, Kylie Minogue and Robbie Williams - the first reports of the ad reveal that it is inspired by film and fairy tale classics Alice in Wonderland, Red Riding Hood and The Wizard of Oz.

Information about the new John Lewis ad is Â as of yet non-existent, though one tiny detail slipped through the net of silence: the music will come from Lily Allen, who will be singing a cover of Keane's Somewhere Only We Know. Â We're sure the rest will be revealed soon though.

For now, in anticipation of things to come, here's a little reminder of the two retail giants' ads from last year.

Marks and Spencer - The Greatest Hits This Christmas