Coogan on Philomena: "I had to pull my socks up"

Comedy actor Steve Coogan has said that he had to pull his finger out when it came to playing his latest role opposite Dame Judi Dench. Speaking at a press conference this morning (16 October)Â at London's Claridges, Coogan hadÂ nothing but compliments for his Philomena co-star. 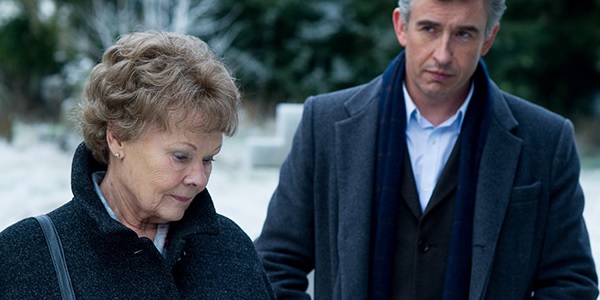 "I was very nervous about being able to share the screen with Judi Dench and knew I'd have to pull socks up. But when I was on set it was great."

The 48 year old - known for his comedy character Alan Partridge - plays the straight man in the Stephen Frears film; a shift in gear compared to his previous body of work. Despite the serious subject matter, there were plenty of laughs on screen as well as off.

"Judi and I didn't spend lots of time anxiously talking about the subtext of the script. And as it was a heavy subject matter, it was a nice relief. There was a lot of laughing."

Written by Coogan (who was also a producer on the film) and Jeff Pope, the film is based on the true story of Philomena (Dench), who at a young age her son was taken away from her from a nunnery and given up for adoption. With the help of journalist and former BBC foreign correspondent Martin Sixsmith (Coogan) the two of them embark on journey to America to find the man she longs to find.

Philomena is part of the BFI's London Film Festival, and is produced by BBC Films, Pathe and Baby Cow (Coogan's production company with Henry Normal). You can watch a clip of the film below ahead of its UK and Ireland theatrical release on 1 November.