24 to film in London 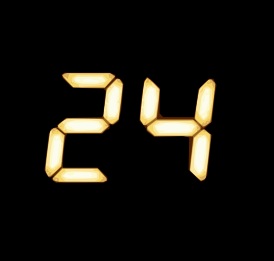 Should you see Kiefer Sutherland dash past you on your way to work wielding a gun and checking his watch, you're not dreaming - the actor is due to film in the UK for the latest series of 24: Live Another Day.

"Jack is soon back on the run and it takes us into the streets of London and to places that break new ground for the show. We've shot in New York, Washington, Los Angeles and Cape Town â€” but now we're in London and Jack's loose on the streets of Europe, hunted by and hunting bad guys," said the show's executive producer Manny Coto.

Kiefer Sutherland, the show's star and executive producer, said: "24 has always had such a global sensibility. But to be able to tell this intense 24-style story with the beauty of Europe's history and architecture as the backdrop is going to be fascinating."

24 has had a four-year hiatus since it was last broadcast in May 2010, when Bauer was left a fugitive from justice, so no doubt fans of the series will welcome its return.

Brian Grazer is another of the show's executive producers; the Hollywood veteran is also producing the Pele biopic, currently shooting in Brazil.