A busy year for Rory Kinnear 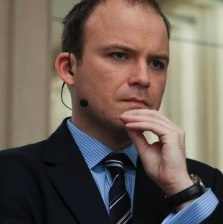 Actor Rory Kinnear shows no signs of thumb twiddling over the coming months with a packed schedule in front of him.

He has recently been filming ITV's two-part drama, Lucan, about the life of the charismatic and flamboyant aristocrat who infamously disappeared following the violent murder of Sandra Rivett, the family's nanny. Kinnear plays Lord Lucan, starring alongside Christopher Eccleston and Michael Gambon.Â

A complete change of direction then as Kinnear is due to film Penny Dreadful, the new psychological thriller series from Sam Mendes' Neal Street Productions for Showtime and Sky Atlantic. Set in Victorian London, the horror series features some of the most iconic characters in the literary genre, including Dracula and Dr Frankenstein. Penny Dreadful stars Josh Hartnett and Eva Green with Billie Piper, Helen McCrory and Simon Russell Beale.

The busy actor is also due to return as co-star in the second series of Count Arthur Strong for BBC Two. The comedy was created by Steve Delaney who stars as the eponymous pompous thespian. Kinnear plays Michael Baker, an unassuming, scholarly man. The second run is slated for production next year.

And then, of course, we are very much hoping that Kinnear will reprise his role of M's chief of staff Bill Tanner when Bond 24 rolls towards production sometime next year.

Rory Kinnear - make sure you take a break over Christmas!

Further information on all the titles listed above can be found on Production Intelligence, our online database of advance and archive productions.