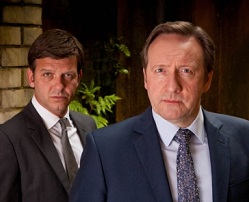 ITV and the Danish public broadcaster DR have announced they will be co-producing the 100th episode of British detective drama Midsomer Murders.

The episode will be filmed in Copenhagen and the surrounding area, and will feature talent from hit series The Killing and Borgen.

It will see DCI Barnaby (played by Neil Dudgeon) and DS Nelson (played by Gwilym Lee) travel to Denmark when detectives there discover a body with links back to a family who live in the English town of Midsomer.

The Danish participating actors include Ann Eleonora Jorgensen from The Killing and Birgitte Hjort Sorensen from Borgen.

The Killings at Copenhagen, as the episode has been named, will be co-produced by DR and All3Media-owned production company Bentley Productions for ITV.

Jo Wright, executive producer of Midsomer Murders said: "Midsomer Murders is incredibly popular on prime time Danish television. It is known as Barnaby and has been running for 12 years winning 40% of the audience share."

The episode has been written by Paul Logue and will be directed by Alex Pillai.

Further information on Midsomer Murders can be found on Production Intelligence, our online database of advance and archive productions.