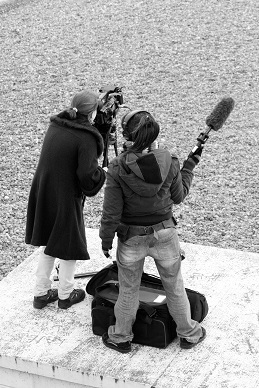 Making your first documentary is a daunting task. I know - I procrastinated over it for more than a year before biting the bullet and seeing what happened.

After setting out to make my first documentary - no/low budget filmmaking at its finest - I feel like I have learned something. Making a documentary with no budget wasn’t a choice, but, with little experience, it was the only place to start. And along the way, I started to understand what skills and tools you need, and which you can leave behind. Resourcefulness and resilience are the most important, but that isn’t going to get your film made.

Getting it off the ground

To make your first documentary film you need a large measure of perseverance and a huge amount of passion for your subject. You need to accept the process is going to be difficult and for the first film it really is all about the process.

Chances are the first time you make something it really won’t turn out how you wanted it to. Learn from it.

And learn from others. Share the load. Collaborating is fun and you’re less likely to give up if you have someone supporting you. It’s particularly good to work with people that are in the same position as you, but bring different skills to the table. By all means, work with people more experienced than you and be open to feedback. But stay firm in your vision. A lot of people are going to try and convince you to go down a different route and for that reason you need to keep reminding yourself of your vision and intention in making this documentary.

Finally, apply to all the small funds you want but don’t wait until you have funding to start making your film. Consider crowdsourcing but be prepared before you launch it. You only have one chance, so you want to make it work.

As a first-time filmmaker, you’re probably not going to get any money. In this respect, making a short is a great calling card: it introduces you to people and gives you credibility. It might also improve your chances of getting some funding, but always prioritize filming, editing what you’ve got into a teaser and then pushing that. No one funds an idea, no matter how good. You need to entice them with something concrete, something visual.

Don’t get hung up on equipment. You don’t need an incredible camera, in fact, according to a POV Documentary Equipment Survey, 45% of documentary makers use a DSLR as a primary camera.

You can even shoot on a smartphone. The iPhone 5S is a camera, with a 8MP sensor and an aperture that opens to f/2.2 . The iPhone 6S can shoot 4K.

Tangerine, Sean S. Baker’s critically acclaimed comedy-drama, was shot on three iPhone 5S due to budget constraints. The result? It went on to premiere at the 2015 Sundance Film Festival.

So what is the documentary first-timer’s toolkit? A camera of sorts (a good DSLR or camcorder) and a couple of extra lenses - a good prime lense is the Canon 50mm F/1.8 and a good zoom is the 70-200mm F/2.8L - is enough to get you started.

A tripod or shoulder rig depending on the style you’re going for are also important. Handheld gives your game away, unless it’s a stylistic choice and then you’ve got to own it. A Go-Pro is good for action shots, but some people dislike the barrel distortion, or what’s commonly known as the fisheye effect.

Depending where you’re working and the conditions you’re working under, make sure you have plenty of spare batteries, SD cards and hard-drives. A 5-in-1 reflector is cheap, light and can be a real lifesaver. And everyone swears by a good pocket-knife.

If you can shoot on pretty much anything - audio is a completely different ball game. Audiences don’t forgive bad sound. The Sennheiser MKH 416 is worth every penny. The Zoom H4N is essential, as is a good clip-mic. Audio equipment generally holds its value. If you can’t afford it, rent it. But whatever you do, use it.

To make documentaries in general you have to be devoted to the unexpected. The ability to improvise and think up creative solutions is also a must. For example, we were in the eastern plains of Colombia trying to make a short. The spirit of the project was very DIY and we needed a steadycam. Needless to say it was impossible to get our hands on one and so we roped in an apprentice carpenter and built one for $10.

But equipment qualms aside, sometimes you need to think on your feet whilst actually filming. Characters might enter the scene that you didn’t expect and suddenly the dynamic flips. You’ll have to rethink the entire scene. Listening is important for that as is the commitment to jump at every new opportunity.

Most of the times the new scenes you get are vastly more effective than the ones you imagined. They are real, and that’s the point of documentary filmmaking.

But being real doesn’t mean being chaotic and inarticulate. To make good documentary films you need to plan, a lot. You come into a scene, like a massive demonstration in the streets of a Latin American city, and you need to make sense of it. Hubert Sauper, director of the Oscar-nominated film Darwin’s Nightmare, puts it beautifully: "It’s strange how a film isolates a view, it elevates it. You need to know exactly what your subject is, your story, your view, to be able to make sense of it for your audience."

That is perhaps the biggest challenge of documentary making - the ability to capture the bigger picture in the details of everyday life, to search and find stories in the bigger social issues. It comes with practice, perseverance and patience.

Whatever you do, pick up a camera and start filming - the rest will come soon enough. Anyone can do it these days, it might as well be you.

Emily Wright is a filmmaker and freelance writer. She has worked on a variety of documentary projects and is currently in Colombia filming her first feature.