Finding distribution for your film 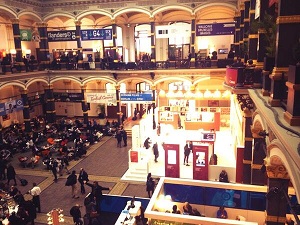 Getting your film distributed can be tougher than actually shooting it, as many filmmakers will have found out. But everybody loves a challenge, don't they? Here are a few tips which can increase your chances of seeing your film actually reach the audience for whom it was intended.

In this crowded marketplace it is important that you keep things simple, both for yourself as well as for the distributors and broadcasters you will be talking to.

You'll need to do some planning and make sure that you have a flexible mindset in order to accommodate the demands that will be put before you.

Be willing to edit

You need to be adaptable as a filmmaker and be willing to tailor the length of your film to the needs of different territories and broadcasters. All channels have different demands and will need films of a different duration to fit into a certain time slot. Make sure you can deliver.

Ensure you get the technical requirements down to a fine art. It will help a distributor reach the widest possible market. You will also need to check if you hold all the rights to any archive or stock footage you might have used. Permission to use footage just for festivals is not as good as it sounds because if the film gets a buzz going, the rights holders can then hold you to ransom.

Think beyond a cinema release

It might not be what you want to hear but theatrical distribution can cost you a lot of money. A semi-theatrical distribution, especially if your film focusses on a specific societal issue, can generate just as much publicity (and income). For example, one night in a particular cinema with a targeted audience can help get film critics interested. This might result in successful video on demand (VOD), DVD or broadcasting sales.

What, where, when and how - getting your festival route in order can be a strategic minefield. Once a film has been shown at a 'second tier' festival it is almost impossible to get into a 'top tier' festival such as Cannes or Sundance. Be bold - why not aim high to start with?

However, make sure you don't get hung up on a festival that won't start the admission process until eight months after you have finished your film. That is eight months in which you could be promoting elsewhere. See where we are going with this? It's all about finding the right balance.

You might want to consider VOD rather than DVD. However, when looking for a service provider there are a few things to watch out for. One is the ability to apply geo-blocking. With geo-blocking, should the film be picked up for broadcast in a specific territory then you can block the VOD for that specific licensing period.

It might be a while before you see your first contract, but when you do, don't appear desperate. Make sure that you know what they mean by 'marketing costs' for example, and place a cap on it. You really don't want to find out that you have not made any money because the distribution company has spent a fortune on expensive and unnecessary goodies that no one is interested in. Also make sure they provide you with a quarterly or even monthly overview of the costs. A surprise where money is involved hardly ever ends well.

Let us know if you we have missed any tips that can help filmmakers to get their work out -Â you can reach us by leaving a comment in the section below or via Twitter and Facebook.