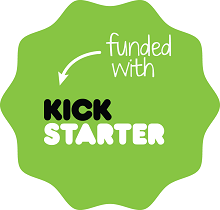 Crowdfunding platform Kickstarter is one of the pioneers in the industry, presenting itself as the "way to fund creative ideas and ambitious endeavours". Not only does it focus on film but during the four years the platform has been around, it raised over $130m for film related projects.

Looking at this increasingly popular funding strategy, The Knowledge takes a closer look and asked: How does Kickstarter work?

The idea is simple. Filmmakers set up a campaign. This entails writing a text in which they set out the what, where, who, how and when of their project and convince you of the importance of supporting them. In addition to this they often release a video, a quick and, if used well, efficient way of getting your attention. The video is more important than you might think. A nice video can be shared and it is the sharing of your goal that will ultimately get your film funded.

In return for your donation a filmmaker will offer you some goodies, which can be anything from a DVD, T-shirt or meeting the main character to a ticket to the premier or credits in the film.

If the project succeeds in reaching its funding goal within the time limit set - a maximum of 60 days - all backers' credit cards are charged when time expires (more on these costs further on).

It's important to understand that Kickstarter is simply a facilitator. All responsibility for delivering a viable project and being accountable to backers lies with the creator.

Currently, Kickstarter is only available to US and UK creators (or those with a bank account in one of these countries) but it has recently announced plans to expand further.

What will using Kickstarter cost you?

The platform is powered by an all-or-nothing funding method where projects must be fully-funded or no money changes hands. If your project is successful, Kickstarter charges for its services. The business will apply a 5% fee to the funds collected.

So what is telling you that it works?

In January 2013, Kickstarter provided a detailed breakdown of how much independent film funding it had facilitated since its launch. It also released a nice slideshow highlighting its successes in 2012.

Will my film make it to the big screen if I use Kickstarter?

More than 8000 films have been created including 86 that received a theatrical release. In 2013 the first film funded through the crowdfunding platform even won an Oscar - Inocente, for best documentary short. This was after two others (Sun Come Up and Incident in New Baghdad) were previously nominated. In addition, 49 Kickstarter-funded films have been official selections at the prestigious Sundance festival.

It is worth noting that sites like Kickstarter seem suited to micro, small and medium budget projects. For the big bucks the more traditional way of funding does still seem to be the way forward. However, some of the filmmakers that have succeeded to make their film have used crowdfunding as a way to show the studios that there is a demand for their project, putting the big bosses minds at rest that there is an audience.

On the platform backers decide the validity and worthiness of a project by whether they decide to fund it. The website does give some valuable tips on how to asses credibility though if you are planning to back any projects yourself. Take a look here.

To increase your success you need to keep communicating your campaign. You will need to make it your priority and get it out there via all social media platforms, email, word of mouth and other forms of communication you can possibly tie in with your campaign. One thing many filmmakers forget is that people will not just come to them; they need to be in the picture first and get noticed. Social media, blogs and word of mouth can help with this.

It is also advisable to launch a campaign once you have already got the first 10% (from friends and family for example). This has shown to work well for the outcome.

To compare Kickstarter with other useful crowd funding sites, it’s worth taking a look at our previously published How to Crowdfund Your Film guide.